The following notes are from the Ramsey DocCourse in Prague 2016. The notes were taken and edited by myself and Michael Kompatscher. In the process we may have included some errors; email us or comment below and we will happily fix them.

In this lecture we discussed some standard notions from model theory that will be used in the rest of the Bootcamp lectures. Further we discussed the Rado graph (also known as Random graph) as an example of a homogeneous structure.

Definition. A language (or signature)

is a set of symbols, which can be diveded into relational symbols (usually denoted by capital letters

we associate an natural number

is called the domain of

the interpretation function. For

for every relational symbol

is a function from

For simplicity, we usually don’t talk about the interpretation function and write

. If it is clear from the context, we sometimes abuse notation and write

for both the symbol and its interpretation in a structure.

Constants can be regarded as unary singleton relations, or as 0-ary functions. However, in the Bootcamp lectures, we are only going to discuss relational structures, i.e. structures whose language only consists of relational symbols.

-)homomorphism, if, for every relation symbol

and for every function symbol

is called a strong homomorphism if futher

to itself is called an automorphism of

and the identity is an embedding of

. If there is an embedding of

, we call the image

Erdös and Rényi showed the paradoxical result that there is a unique (and highly symmetric) countably infinite random graph. We are going to discuss this graph and some of its properties in this section.

satisfies the extension property, if for all finite, disjoint subsets

there is a point

has an edge with every element of

and no edge with elements from

are two countable graphs with the extension property, then

are isomorphic.
Proof. We are going to construct an isomorphism from

that extend each other. Let us fix an enumeration of the vertices

and an enumeration of the elements of

Suppose we have already constructed an isomorphism

from a finite subset

be the first element of

; it gives us a partition of

into the set of its neighbors

. By the extension property of

, there is also a vertex

has an edge with all elements of

and has no edge with elements of

we extended the given isomorphism to

To ensure that every vertex of

is in the image of

we alternate in the next step, finding a suitable preimage of the first element of

. This can be done symmetrically by the extension property of

are countable, the union of this ascending sequence of finite isomorphisms is an isomorphism from

The technique used in proof above is known as back-and-forth argument or zig-zag argument. This proof techniques appears also in other talks of the course, in particular in the proof of Fraïssé’s theorem in Bootcamp 5.

It is not difficult to show that there are graphs with the extension property. An explicit description of such a graph was given by Rado in 1964. The vertex set of the Rado graph

are the natural numbers, where for

there is an edge between

if and only if the binary representation of

Exercise. Show that the Rado graph satisfies the extension property for graphs.

There is also a probabilistic characterization of such graphs by Erdös and Rényi, which preceded Rado’s construction. Let us denote by a random graph a probabilistic distribution over graphs, in which the probabilities for edges are distributed independently, with probability

each (Note by Michael: In literature the term “random graph” sometimes also refers to graphs generated by some other random process).

Then the following holds:

is isomorphic to the Rado graph

with probability 1.
Proof. If we are able to show that the random graph

satisfies the extension property with probability 1, we are done. So let

be two finite, disjoint sets of vertices in

. Then, for any vertex

the probability that there

has edges to the elements of

and only non-edges with the elements of

. Since edges and non-edges are distributed independently, the probability that there is no such vertex is equal to

By the above theorem the Rado graph is often also called the Random graph. The Rado graph

has several other nice features, making it a highly symmetric structure:

be a structure in relational language. Then we say that

is homogeneous if every isomorphism between finite substructures of

extends to an automorphism of 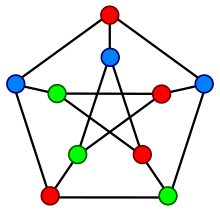 In the case of graphs a full classification of the homogeneous graphs is known: in the finite case this classification is due to Gardiner, in the countable case due to Lachlan and Woodrow.

is a finite, homogeneous graph it is isomorphic to one of the following: 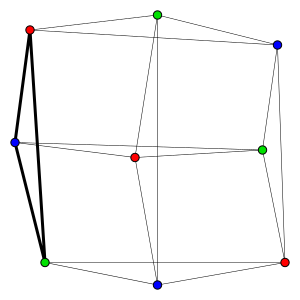 is a countable, homogeneous graph it is isomorphic to one of the following:

We will hear more about homogeneous structures and a way of constructing them in Bootcamp 5.

be a class of structures in the same language. The we say that

-)universal, if every element of

-universal structure. A counterexample for graphs was given by Füredi and Komjáth:

Theorem (Füredi, Komjáth 1997). There is no countable graph

is universal for the class of

-free graphs, i.e. the class of graphs that do not contain

by any finite, 2-connected, but not complete graph); but here we only present a proof for

Proof sketch. We are going to use the following lemma:
Lemma. For all integers

there exists a number

(Michael: My notes on the proof of this lemma are not complete…)

Now let us take the hypergraph

given by the above Lemma. Further let

be graphs on 7-element vertex set, such that in

the first 4 elements form a path and the last 3 a cycle; and in

also the last 3 elements form a cycle and there is an edge from the first to the forth vertex.

we then form a

. Note that the graph is well-defined and

-free by the properties of

Now assume that there is a countable universal

has to embed all the graphs of the form

be an embedding of

is countable, there are two graphs

agree on the set

, there has to be a minimal integer

, where they disagree. Then, by construction of the graphs

has to contain a 4-cycle. But this is a contradiction.